Motivational speaker and author of Walk by Faith 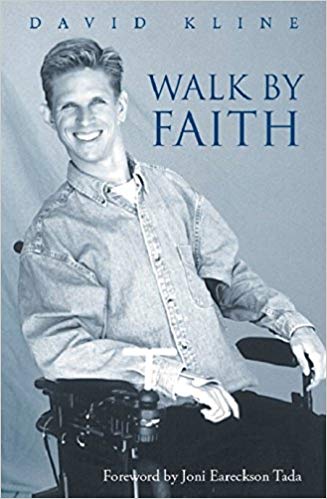 In high school, David Kline was the All-American kid--excelled in multiple sports, achieved honor roll every year, played the lead in school and community theater, sang in the top choir, and was elected to student government. He was fun, outgoing, and independent. Everything was going his way.

All that changed on a beautiful summer day in 1987 when a diving accident left him paralyzed from the neck down. In an instant, David faced the rest of his life confined to a wheelchair, his health and well-being reliant on the hands of others.

As if permanent paralysis was not difficult enough, David flatlined twice, suffered double pneumonia, and relied on caregivers who turned out to be drug addicts, alcoholics, and thieves. But this would not deter his motivation to push on for a meaningful and successful life.

In this inspiring memoir, David shares how God's Word and grace gave him the strength, hope, and trust to never give up and to believe that God's plans are bigger than his own.

"We have all been in situations we look at as challenging or even hopeless. But very few of us have ever had to endure the paralyzing of our body like David Kline. Yet as I read his journey, I found myself immersed into his situation and life. I laughed, I cried, I questioned and I praised God right along with David. This story will inspire you! Romans 8:28 "And we know that God causes everything to work together for the good of those who love God and are called according to His purpose for them." I believe David lives out this verse everyday."
George Rath
News Anchor at K-LOVE Radio Network

"David had the potential to take his talent and make a life of what he enjoyed most - athletic competition. Those of us who have been to the top of our game and become one of the few that make it to the professional level know that we attained that by hard work and total commitment. But when the day suddenly comes and it's over, who are you now? How does life change when everything you've done is stripped away from you and the body that was your vehicle for success becomes the most challenging barrier in your life? David tackles this challenge head-on with incredible strength and determination. His faith and hope are an inspiration to me and to everyone who hears his story."
Marty Mathiesen
Former San Francisco Giants pitcher
Copyright © 2023 David Kline | All rights reserved.